What doesn’t kill you makes you stronger
30 years of broken holds, bones and other temporary setbacks on the way to the top
International Climbers’ Festival
August 8, 2010 6:30 pm Noble Hotel Lander, WY
During the last 30 years, Dave Anderson has been establishing new routes and ascending unclimbed peaks around the world. Dave’s expeditions have received numerous climbing grants, such as the Mugs Stump, Shipton/Tilman, Liman Spitzer and Polartec Awards, which have enabled Dave to explore and put up first ascents in thirteen countries on four continents. From highball boulder problems, to speed ascents of El Captain and the Wind River Range, to winter ascents of Himalayan peaks, Dave has experienced it all.
But for every peak climbed there have been an equal number of forced bivies, stuck ropes, numb fingers and gobis that have evoked fits of laughter as well as the occasional temper tantrums.
Join former Lander local Dave Anderson for a hilarious evening of stunning images from the world of climbing; from boulder problems to high altitude peaks and everything in between. Hear tales of big whippers, flappers, dropped gear, relationships lost and being hopelessly off route, with a dose of broken down vehicles, air travel mishaps and automatic weapons thrown in for good measure.
Laugh and learn from Dave’s tales of failure and triumph. 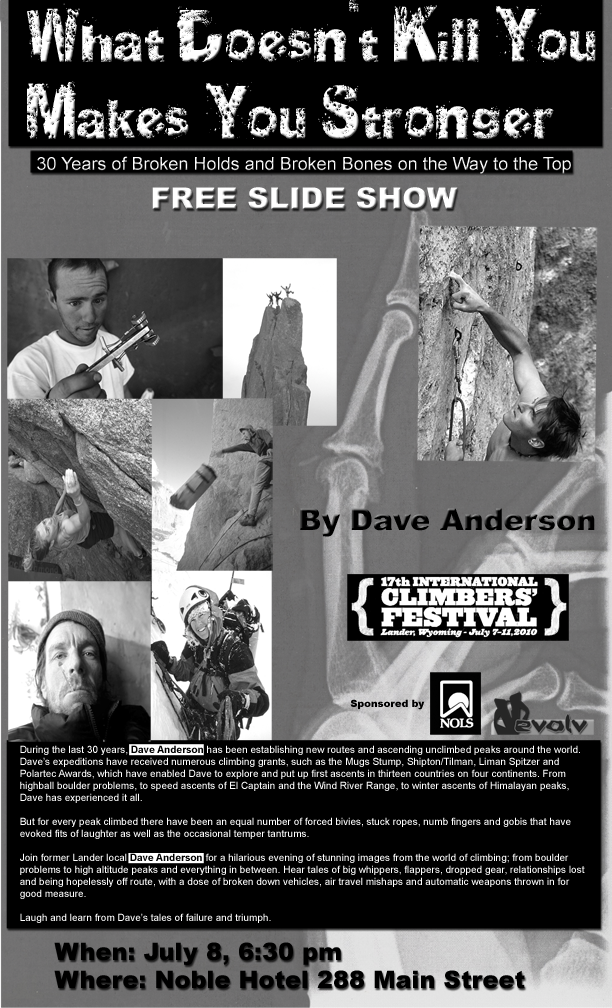